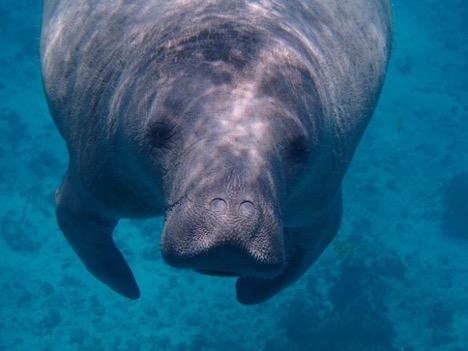 We’re all familiar with mermaids of the sea that are (sadly) mythical, but from a distance, our beloved sea cows can be reasonably mistaken for mermaids. After all, Christopher Columbus made this exact assumption as he sailed near the Dominican Republic in 1493.

There are three species of manatees; the Amazonian manatee, the West African manatee, and the West Indian manatee. All three species are named after the region they inhabit. This living species of Trichechidae belong to the order Sirenia, better known as sea cows, composed of them, and their relatives, the dugongs. Manatees are very large, gray creatures, primarily known for their mermaid-like tail and slow movements. On average, adult manatees range from 9-10 feet long and weigh 1,000 pounds. As herbivores, they eat a wide range of plants and algae found on the seafloor, mostly seagrass. What’s interesting about the sea cow is its ability to hold its breath for 20 minutes when inactive, yet when active can only hold its breath for 5 minutes before coming up for air. However, manatees are not just bound to ocean floors, they can be found in many bodies of water; such as rivers and lagoons.

The Florida Fish and Wildlife Conservation Commission stated the leading cause of death in West Indian manatees for 2020 was perinatal, meaning the manatee dies from non-human related causes in a time frame of the day before and the day after birth while being 60 inches or less. 40 percent of recovered perinatal carcasses were found to have died from either disease or stillbirth, fetus death before or during delivery.

While we continue to be captivated by these gentle giants, they are sadly extremely susceptible to humans. The second leading cause of manatee deaths in Florida for 2020 was watercrafts, with a total of 90 reported throughout the state of Florida. Watercraft collisions affect manatees in two ways; blunt-force trauma, and sharp trauma. Blunt-force trauma is caused by any part of a watercraft making contact with a manatee. This results in rib injuries and internal bleeding to more commonly, death. Sharp trauma is due to propellers of a watercraft, or any part sharp enough to cut and cause harm to a manatee. This form of trauma also results in death, due to lacerations in organs. As boat traffic continues to rise, there is much uncertainty of manatees’ fate.

Just as climate change is responsible for the deaths of many other marine species and organisms, it has large effects on a manatee’s life. As bodies of water continue to become polluted, seagrass, the primary food source for manatees, begins to die off. While it is a necessity for manatees to live in a warm climate due to their low metabolic rate, a warmer climate caused by climate change can kill manatees due to the birth of toxic algae blooms. Algae blooms are made up of drastic increases of algae in bodies of water. They are easy to identify by the discoloration in the water, these are fatal to manatees due to their toxicity. 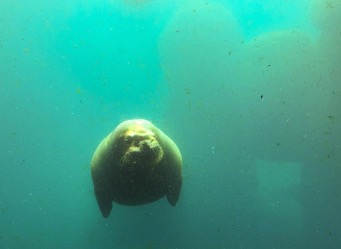 In addition to the threats facing manatees resulting in high death rates, female manatees have extremely low reproduction rates. A female manatee has the ability to give birth to one calf every 2-5 years. Surprisingly, manatees do not form permanent bonds for breeding as other species do. Instead, several male manatees follow a female to mate with her, thus creating a mating herd. All three manatee species have a gestation period of about a year. When a calf is born, it is able to begin swimming right away along with its mother. The mothers nurse their calves for a year or two while the males continue joining mating herds.

Currently, all three species of manatees are labeled as “vulnerable” meaning they are at high risk of becoming extinct due to their dramatic population declines. It's essential, more than ever that we are cautious when utilizing waterways. Ensuring we are obeying waterway rules and regulations not only protects the ocean life, but it protects us. In addition, avoid traveling on seagrass, as these shallow areas are crucial in manatee life.

The good news is scientists are endlessly working to ensure the public is constantly aware and educated on the manatees’ status. However, these man-made threats are key to the vulnerable status of manatees. Rehabilitation and release groups play a vital role in the recovery of manatees and protecting their aquatic habitat. There is still time to take necessary actions and precautions to save the manatees, but it is essential we do them now, in fear these gentle creatures become extinct.

Sources and Other Information: