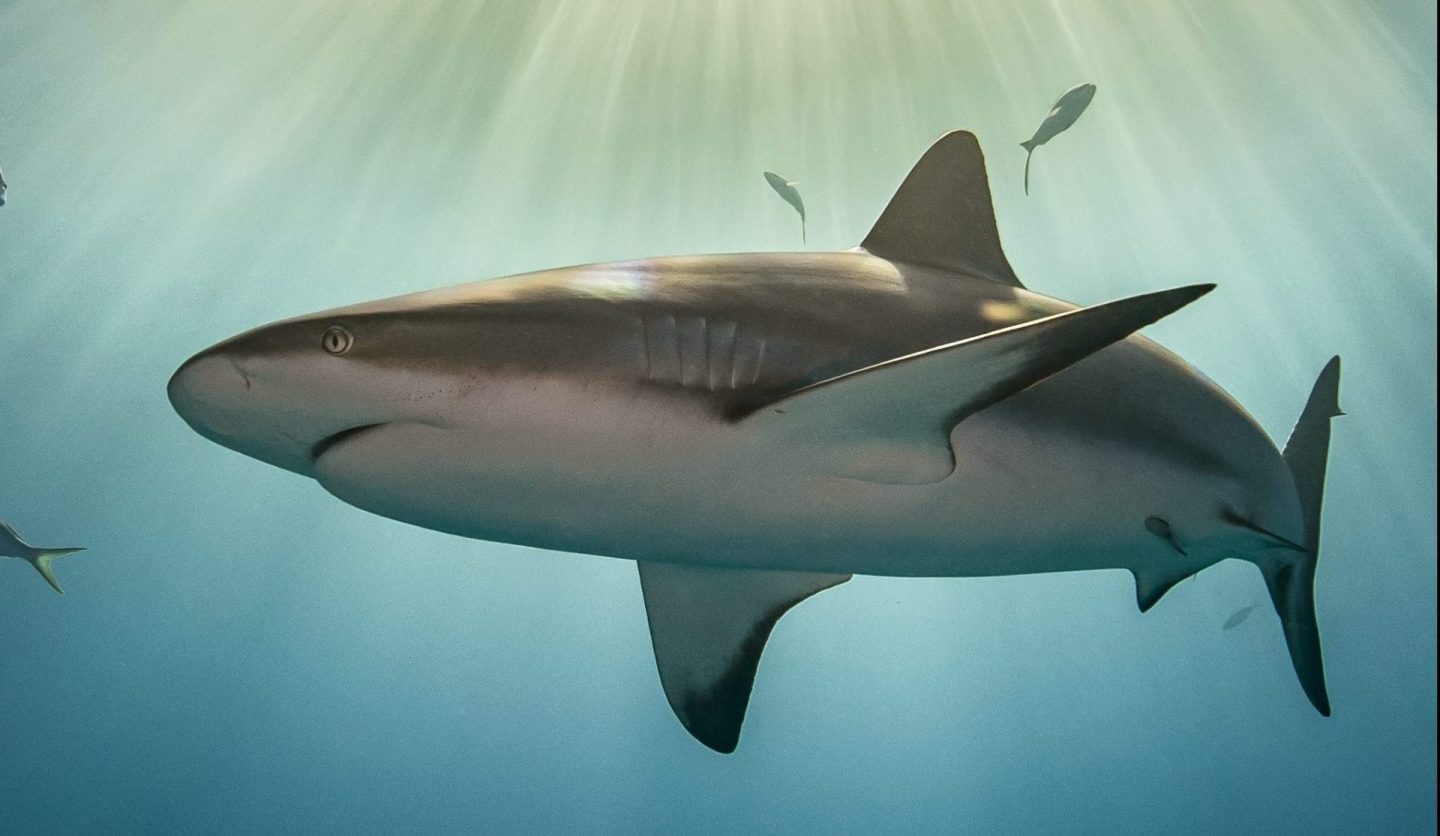 “When I grow up, I want to be a shark photographer!”

Actually, those words never once crossed my lips when I was young. Quite the contrary, I was terrified of sharks. As a child in the mid-to-late 1970s, I was very aware of the blockbuster movie ‘JAWS,’ and its portrayal of a vengeful, man-eating great white shark. Growing up in southern California didn’t help either. There were many trips to the beach where I would wade into the surf until the water hit knee-level, and that was where I stopped, certain that if I ventured much farther there was sure to be a shark waiting to devour me. If the beach was really crowded, I might just go into waist-deep water, figuring that the chances of the shark choosing me out of all the other people were pretty slim. But those waist-deep excursions usually only lasted around five minutes. Ten minutes max. 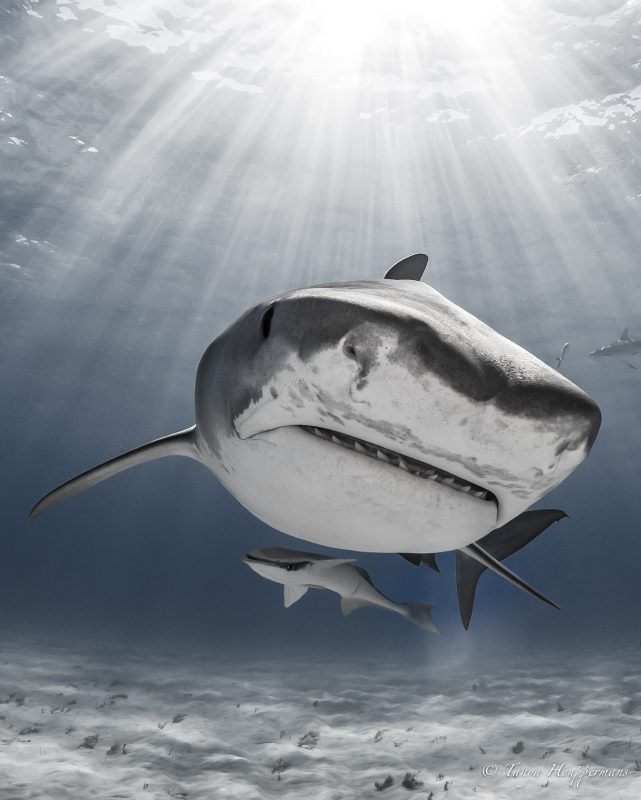 So how did I go from being convinced that I was about to be a shark’s next meal to traveling the world to photograph and try to save them? A big part of that had to do with my becoming a diver and actually seeing sharks in the wild. Early in my diving career I decided to earn my Wreck Diver certification, and that lead me to the shipwrecks off of North Carolina, an area known as ‘The Graveyard of the Atlantic’ due to the high number of wrecks lining the coast. These wrecks are also a favorite hangout of sand tiger sharks. Sand tigers look vicious with their rows of scraggly, pointed teeth. But as I quickly realized during my first few wreck dives, these sharks were not bloodthirsty monsters. They were actually docile to the point of being almost lethargic. I was struck by how graceful they were as they effortlessly glided through the water. There were so many sharks around that they would brush up against me, but oddly enough I didn’t feel any fear. Instead, I felt fascination and awe. And although I had only dived with sand tiger sharks at that point, I had a strong suspicion that I had also been wrong about other shark species too. Maybe they weren’t as bad as they are so often portrayed in the media. 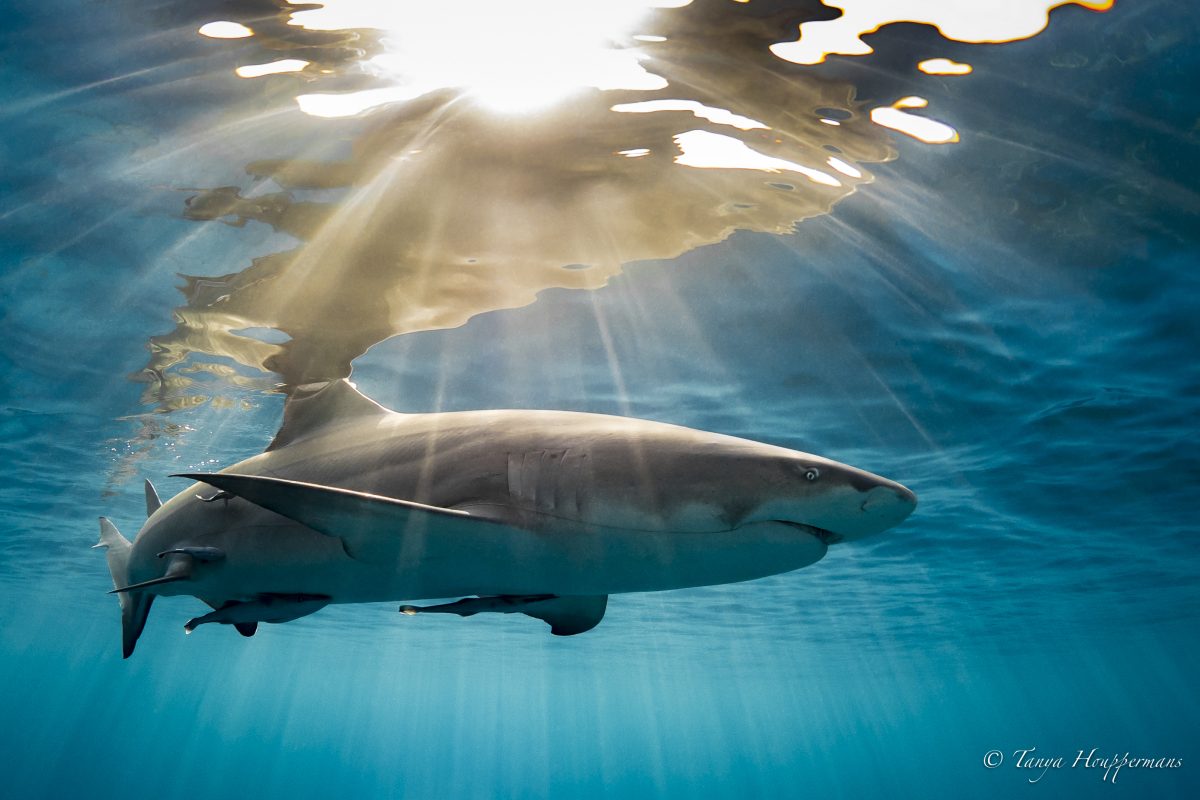 I started doing my own research about sharks, initially to find out just how much of a threat they are to humans. But what I learned was that it was the other way around – humans pose an exponentially higher threat to sharks than sharks do to humans. I had no idea that over 70 million sharks are killed by humans every year. Some are caught as bycatch, but many are deliberately targeted for their fins in a barbaric and inhumane practice known as ‘finning,’ where the shark’s fins are sliced off while the shark is still alive. The shark is then left to drown since the value lies not in shark meat, but in their fins, which is used to make shark fin soup, considered a delicacy in many cultures. Contrast this with the average number of people killed by sharks worldwide, which is roughly seven. While each human fatality is of course a tragedy, the chances of being killed by a shark are miniscule.

I still can’t explain why I started to feel such an affinity for sharks, but I do know that part of it had to do with my anger about how misunderstood they are. I started diving with more shark species – tiger sharks, hammerheads, lemon sharks, reef sharks, and nurse sharks. These were not the savages that I had seen in the media, and I wanted to help them. I became involved in shark conservation, even running a marathon to raise money for a shark conservation organization. But I still felt like I could do more. So, I bought a camera. 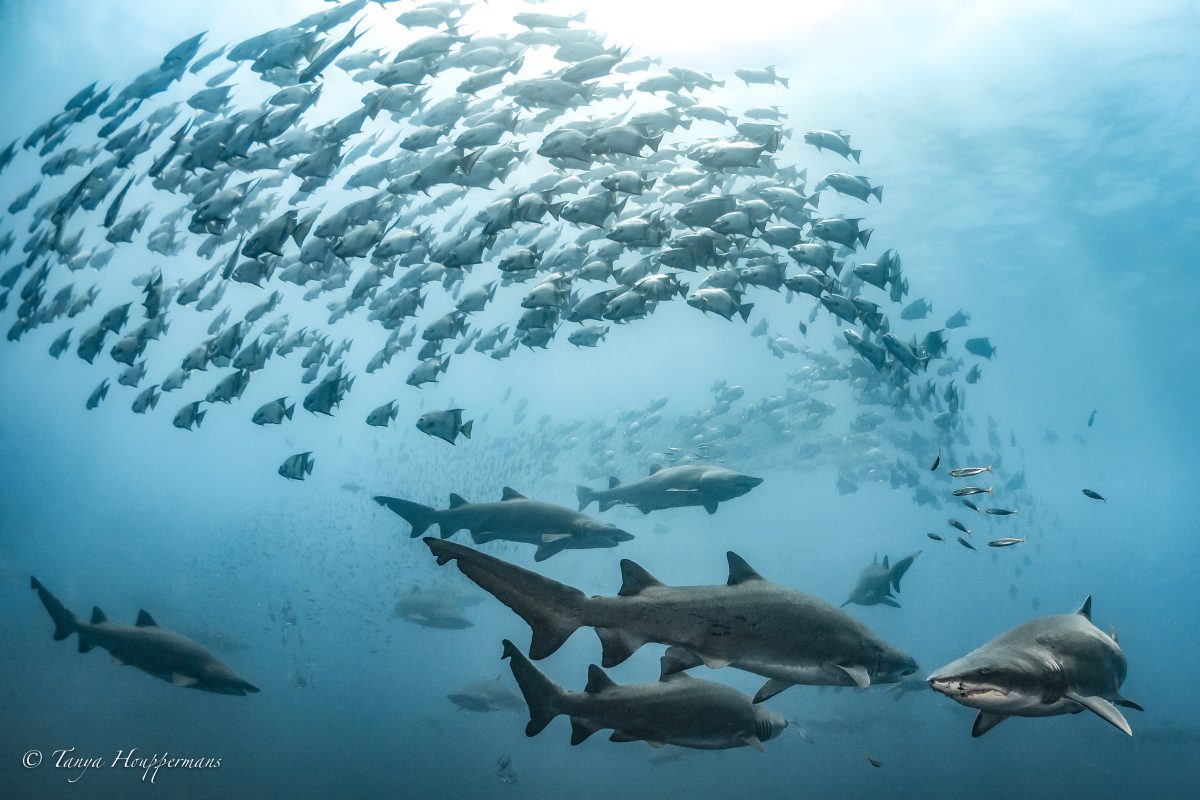 My intention was to hopefully take some decent images of sharks to show them to the public the way that I see them – beautiful, graceful, intelligent, and fragile. There were already so many images out there of sharks with gaping mouths in the act of devouring their next meal, but not many that actually showed their beauty. So that was my goal, to show the beauty of sharks. There was only one problem. I didn’t know anything about photography. So I started reading everything I could get my hands on about about underwater photography. And then I practiced, first in my local quarry, and then on shark diving expeditions. And to my surprise, the pictures actually looked pretty good. The act of photographing animals underwater felt natural, and I truly loved doing it.

At the same time that my photography was growing in popularity, I was becoming more and more unhappy with my career. I had originally started out as a mathematician for the Defense Department, and then moved on to a corporate consulting firm for the U.S. military. The last couple years of my corporate job were miserable, and I found that the only thing getting me through the day was the thought of my next dive trip. I began to think, “What if instead of working to pay for dive trips, diving was my work?” I talked it over with my husband, since our household income would take a huge hit (no one becomes an underwater photographer to get rich, that’s for sure), and we both decided that it was time to take a chance. A few days later I handed in my resignation. 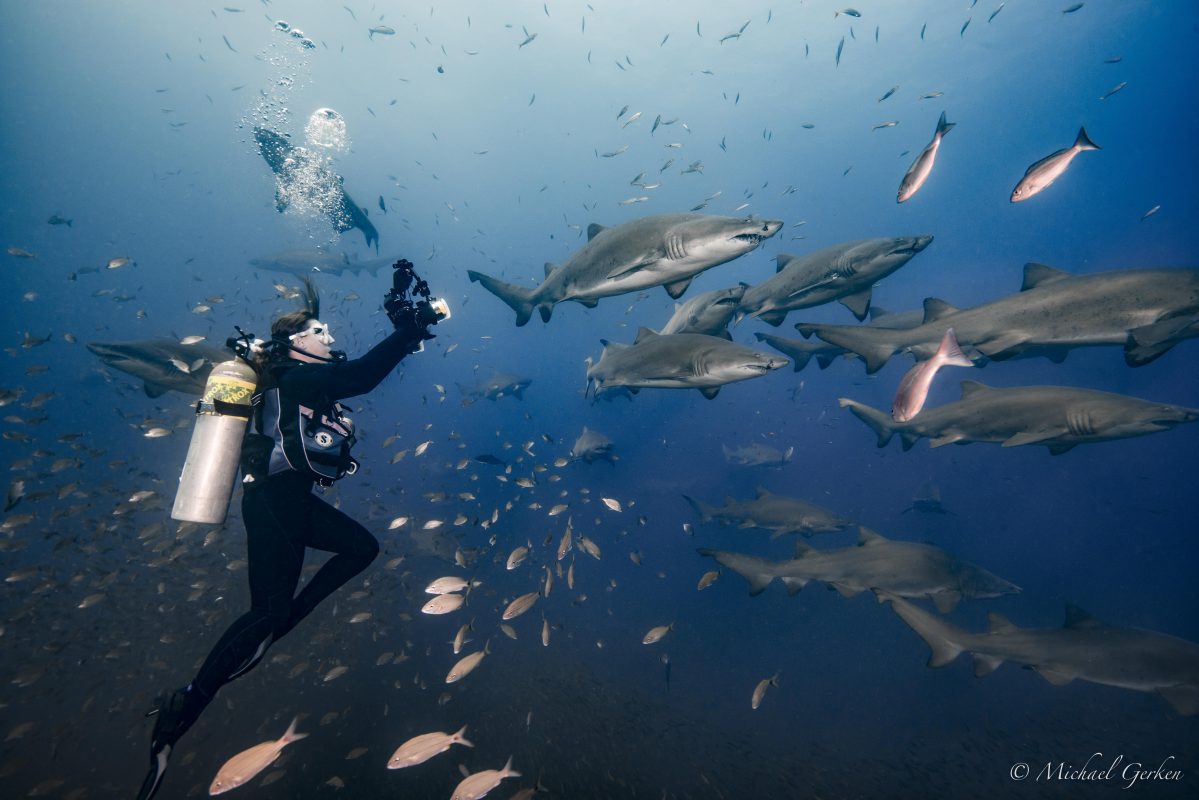 And I lived happily ever after. Okay, not really. I am much happier now, and I love my job, but it is hard work. I not only had to learn how to produce great images, but everything that goes along with running a business such as web design, accounting, marketing, and bookkeeping. I am constantly in the process of planning travel for myself and for the group dive trips I lead. I write articles, submit images for publication, instruct photography students, give public presentations, and work with several conservation organizations. I have to buy and maintain my photography and scuba gear. The work is never really done, and one of the most difficult aspects for me in running my business is knowing when to give myself some time off and take a little break. But I am extremely grateful to be doing something I feel so passionately about.

The most fulfilling part of my job is when I witness people’s attitudes toward sharks change because they’ve viewed some of my images. When they see how truly amazing these animals are, and just how dire the situation actually is for sharks, people often want to help. Some are surprised when I tell them that they don’t need to live anywhere near the ocean to help sharks. A big part of saving sharks is protecting their environment. By doing something as simple as using less plastic and recycling what you do use, you are helping to keep those plastics out of the ocean, which in turn not only helps sharks but all of the animals in the marine ecosystem. Another easy way to be a shark conservationist is to not use or consume shark products such as shark cartilage supplements and makeup containing shark oil. These things are easy to do, and it just takes people seeing sharks in a positive light to initiate these critical changes in behavior. I’ve found that once people understand that helping sharks leads to helping the oceans which leads to helping the planet as a whole, they tend to take on more of a conservationist mindset. And this makes what I do worthwhile. 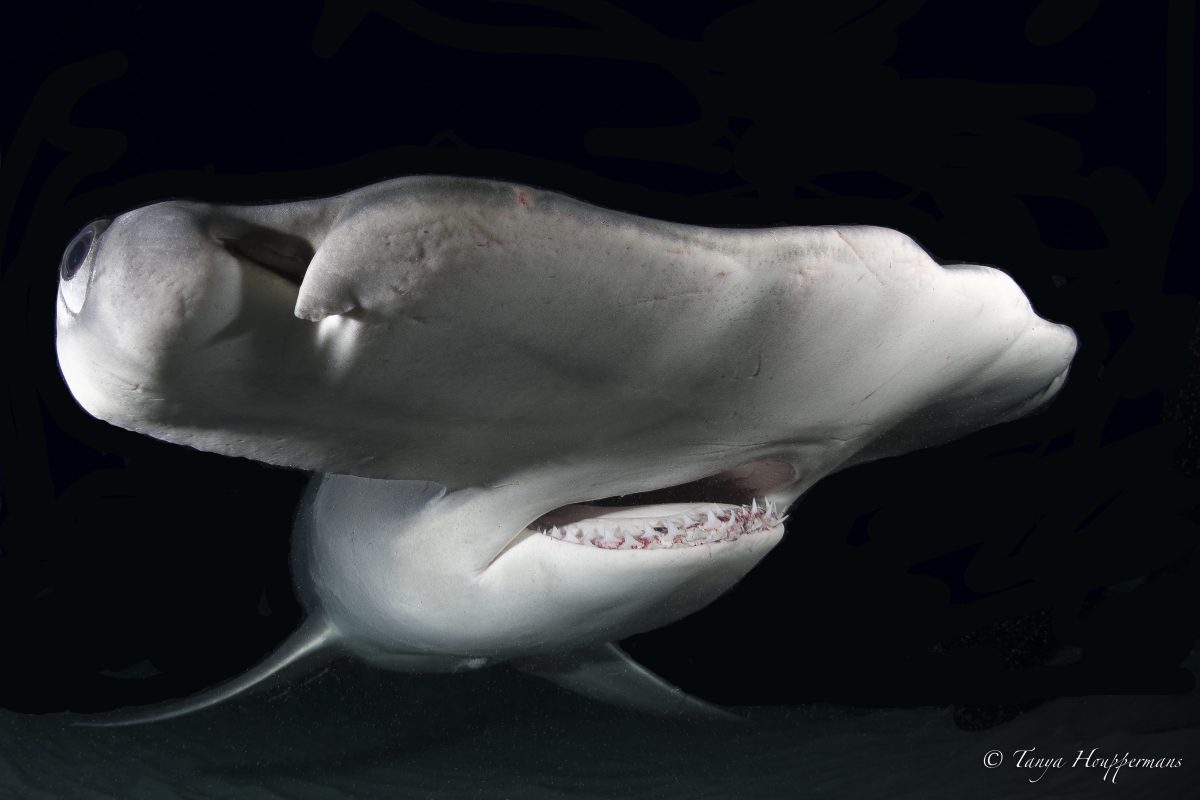 It’s been nearly two years since I traded in my business suit for a wetsuit. And I can honestly say that I have never once regretted my decision. My income may be lower. And my workload may be much higher. But I feel that I’m making a difference, and hopefully along with my fellow wildlife photographers, filmmakers, and conservationists we are impacting the world in a positive way. And when I look back at how far I’ve come from being a little girl who was terrified of sharks I have to laugh. Because today if I were at the beach and someone yelled, “Shark!”, instead of running away from the water, I would probably be running toward the water, with camera in tow.