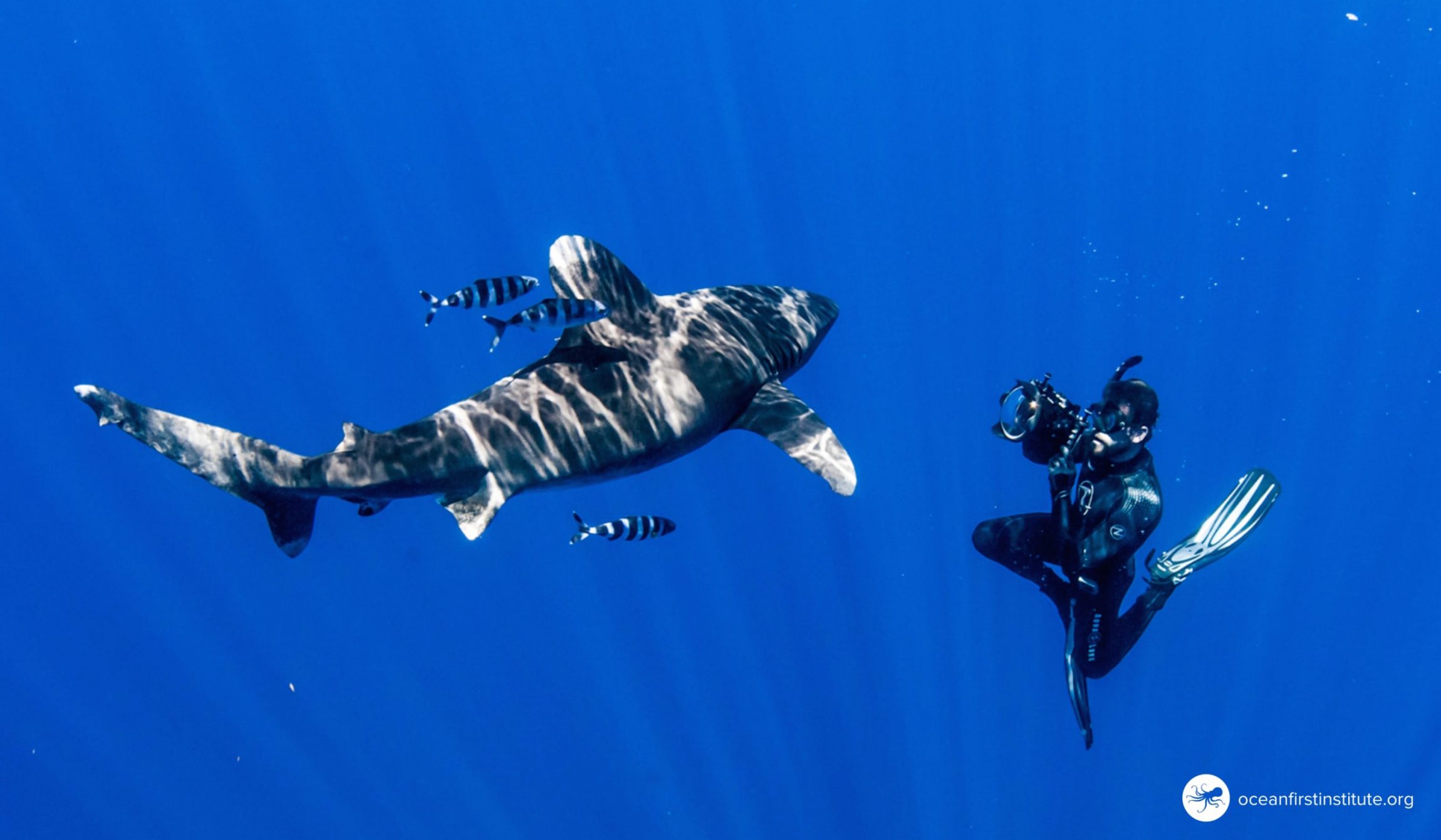 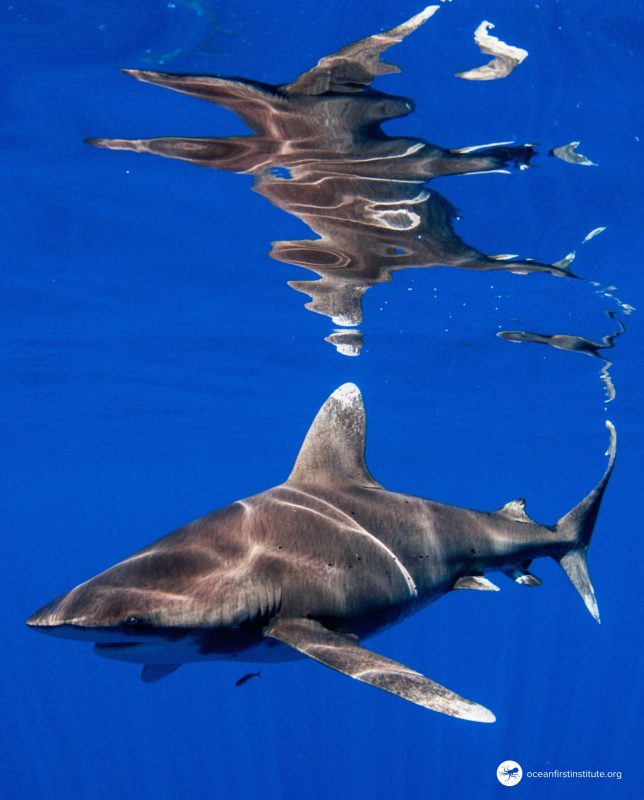 As we dive into Shark Week, we are reminded of the seemingly infinite adaptations that sharks have acquired over the hundreds of millions of years that they have been swimming in the ocean. In our vast and mysterious underwater world, there are many ecosystems that sharks have adapted to and they play vital roles in regulating the populations of other organisms, ensuring that the ecosystems remain in balance. While most attention is given to the more well known shark species, such as great whites, tigersharks, bullsharks, and hammerheads, many other species have equally impressive adaptations and are also truly fascinating creatures. One example is the oceanic whitetip shark, which is a large species of pelagic shark, meaning that this species lives in warm surface waters of the open ocean worldwide.

As you can guess from their name, oceanic whitetips have distinct patterns of white markings on the tips of their dorsal, pectoral, and tail fins. Another characteristic you might notice while looking at their fins is that they don’t have the typical pointed fins like most sharks. Instead, their dorsal fins and long, paddle-like pectoral fins are rounded. These long and rounded fins allow for easy and effortless gliding through the water, which is imperative as this species needs to be constantly moving to breathe via water flowing over their gills. Another perk of these unique fins is simplifying long-distance traveling. With such a vast geographic range of where these sharks can live, they often travel long distances in the pursuit of food and mates. Oceanic whitetip individuals have been observed traveling over 1,700 miles, often utilizing ocean currents to make long treks easier. 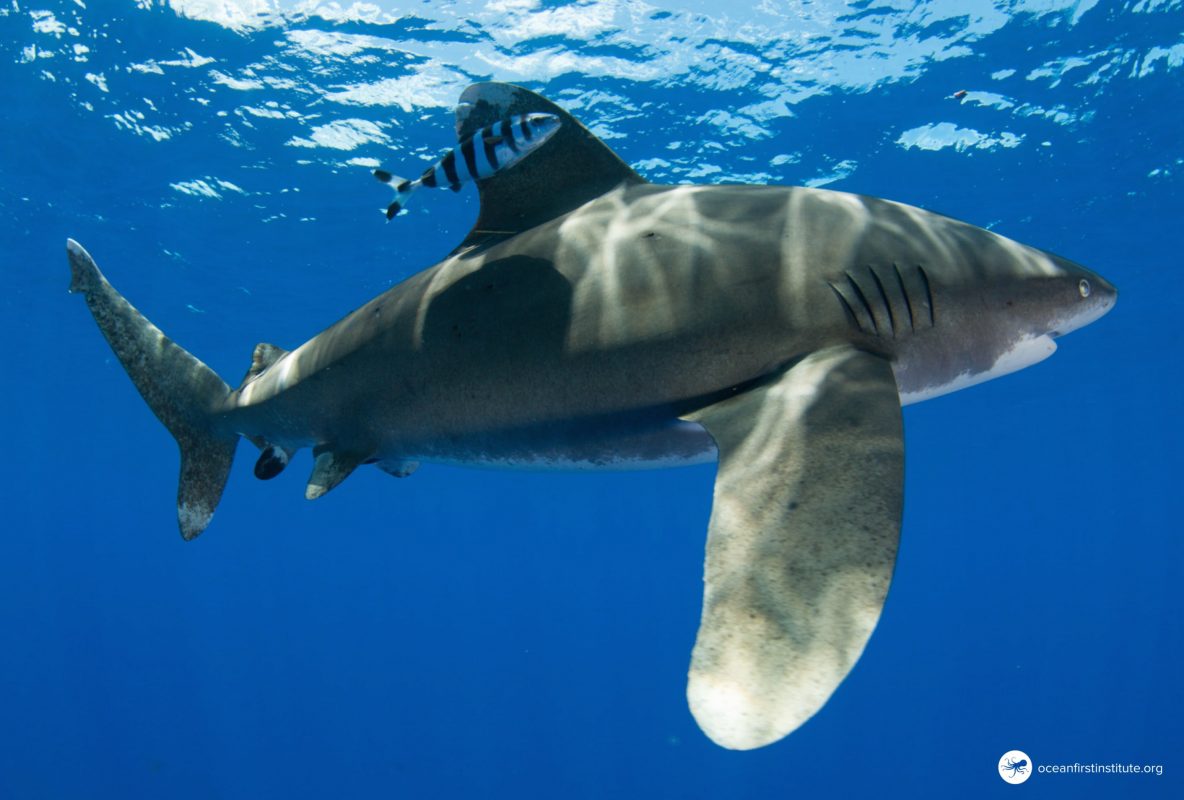 Oceanic whitetip sharks are also nicknamed “sea dogs” due to the similarities in their behavior with that of dogs. These sharks are known to follow ships, as they commonly associate ships with fishing and a potential source of food. This is a curious species of shark, so whenever something peaks their interest, they follow and investigate it while being cautious, and periodically back off to assess the situation. In addition to this, oceanic whitetips hunt effectively in groups and help each other catch fish in large schools, similar to wild dogs and wolves that hunt in packs. 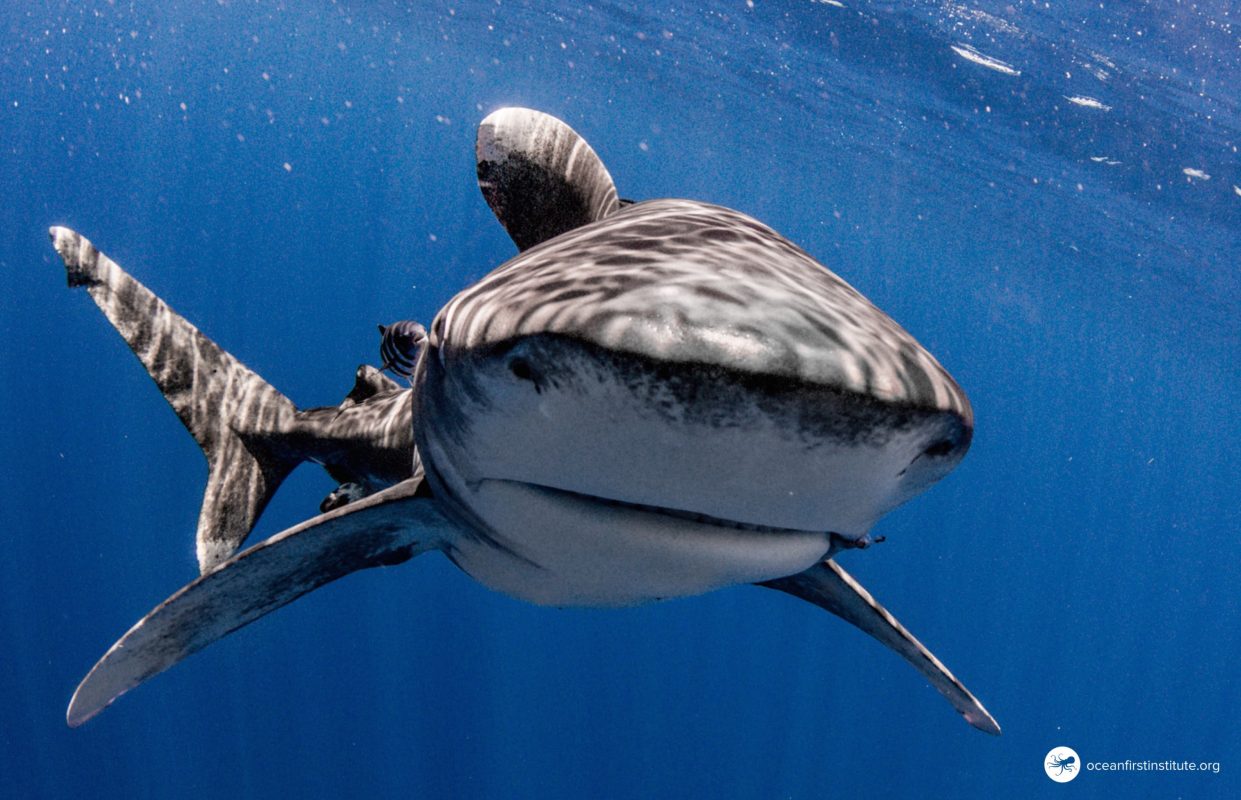 Getting up close and personal with this curious shark. Photo Credit: Caine Delacy.

At just over 11 feet long, oceanic whitetips are large, sleek and streamlined predators. Unlike their slower relatives, such as tiger and bull sharks, oceanic whitetips are capable of short bursts of speed. This gives them an advantage so they can swim fast enough to catch agile prey, such as tuna, barracuda, squid, and mackerels. Foraging out in the open ocean can be a difficult task as prey can be few and far between. Adaptations such as quick bursts of speed can make the difference of survival in such a harsh environment.

As solitary animals, one would expect these sharks to hunt and feed alone. However, due to the scarcity of prey in the open ocean, multiple sharks often congregate to the same food source. This behavior can result in feeding frenzies, in which multiple species of sharks (often oceanic whitetips and silky sharks) feed together on the same prey. Since meals don’t come easily out in the open ocean, oceanic whitetip sharks can’t afford to be picky. They are opportunistic feeders and will target anything they come across, regardless of if it’s a fish, sea turtle, sea bird, or even a shipwreck survivor. As a result, oceanic whitetips are considered one of the most dangerous threats to shipwreck and plane survivors. Despite this, these attacks are often considered cases of mistaken identity as humans aren’t desired prey for any species of shark.

In order to be capable of detecting and tracking down prey in such vast ocean areas, oceanic whitetips (and sharks in general) have some of the most amazing sensory systems on Earth. Equipped with a sense of smell better than a bloodhound, these predators are highly skilled at detecting the presence and even the direction of blood in the water. Also, their sense of hearing is crucial in helping them pinpoint the sound of struggling animals, which is often associated with splashing or thrashing around in the water. In addition to these senses we share with sharks, they also have two extra senses that are crucial in their hunting strategy. One of these senses is the ability to detect vibrations and pressure in the water. They are capable of this through their lateral line system, which allows them to hone in on changes in pressure and any movement around them. The other additional sense they possess is electroreception. Through jelly-filled pores on the underside of their nose, known as the Ampullae of Lorenzini, they can detect the natural electrical impulses given off by all living things. With their sleek, streamlined bodies and these finely tuned senses, oceanic whitetips definitely deserve their title as being one of the best hunters in the ocean.

Sharks have had millions of years to adapt to fit perfectly in their niche and their environment, and thus have become key predators in ecosystems throughout our ocean. Despite this, the impact that humans have on these predators continue to pose a threat to their survival. Even though oceanic whitetips live far out in the open ocean, the anthropological threats of shark finning and bycatch have put increased pressure on this species. As a result, oceanic whitetips are officially a vulnerable species. While it seems like we know a lot about this fascinating species, we have much more to learn about sharks, our ocean, and all of the other amazing creatures that live there. In order to continue to learn more and further appreciate our diverse marine life, we must do all we can to raise awareness and protect these species. Want to learn more about the oceanic whitetip shark? Check it out here! 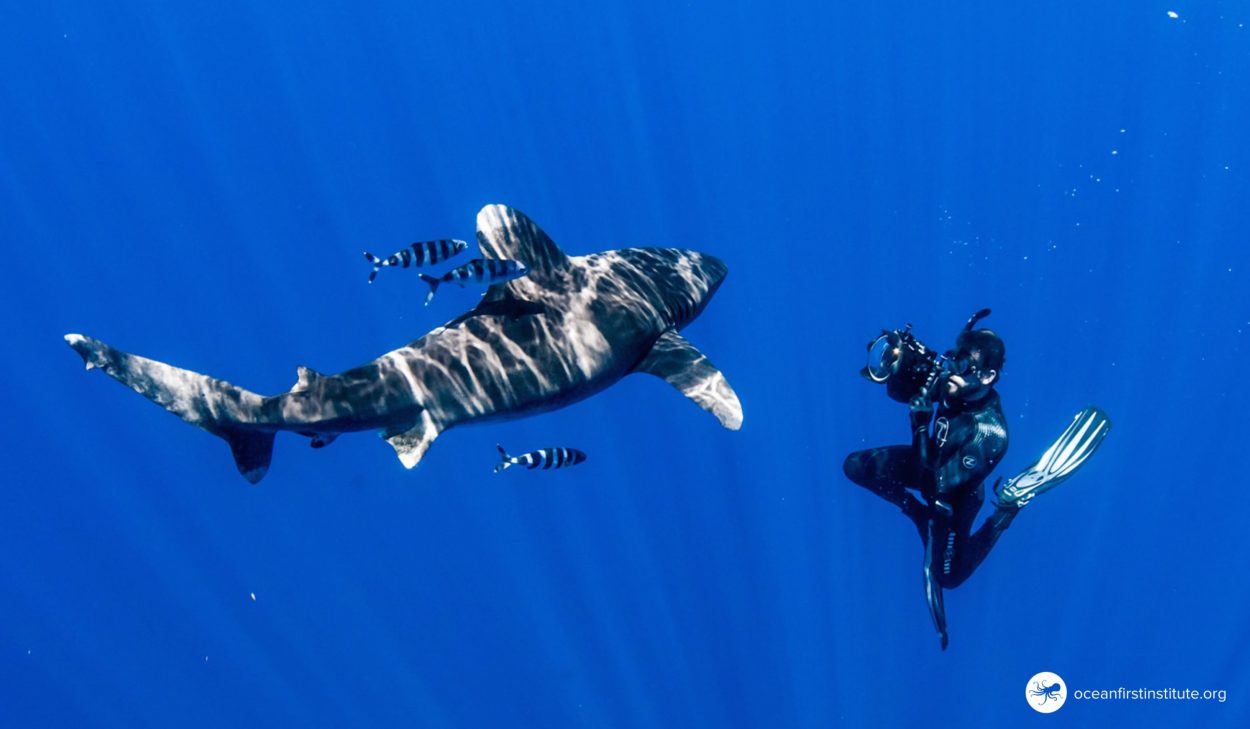