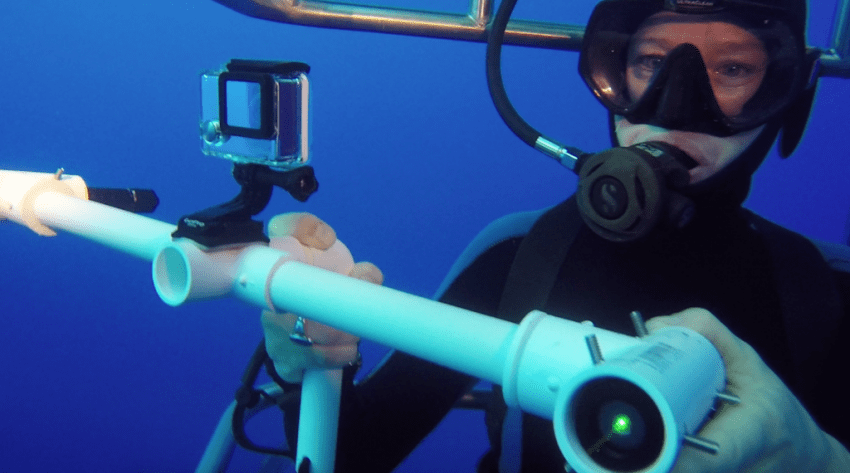 Click Here To See Featured Story In The Times Call

Click Here To Watch A Video About The Project

“It’s just cool that high schoolers are building this,” Coronado said. “It’s really fun to play with all these toys.” The aquatics robotics team was initially created through a partnership with the Denver Zoo, with students modifying an underwater robot that’s being used in the zoo’s work on surveys of a frog found only in Peru’s Lake Titicaca.

Axel Reitzig, a program director at the St. Vrain Valley School District’s Innovation Center, carries a poster of a great white shark to test the alignment of a laser and camera system at the center on Thursday.

For their latest project, the shark measuring device is headed to the Pacific Ocean later this month with McComb-Kobza, who is diving with great white sharks as part of a research project. McComb-Kobza initially wanted to borrow the underwater robot. But it was too cumbersome, so the students worked on creating something easier to use.

“What we built is cheap, easy to use and easy to put together,” Guerrero said. The students said building the lightweight, handheld frame from PVC pipe was the easy part. A trickier component is spacing and calibrating the lasers. To make sure the device is accurate, they’re going low-tech by using a picture of a shark taped to a whiteboard. The lasers are on the ends, set a distance of 50 centimeters apart, with a GoPro camera in the middle. McComb-Kobza will project the two spots from the laser beams onto the side flank of the shark as it swims by, with the camera taking pictures and video. Then, she’ll find the best images. From a photograph, she can calculate the pixels between the laser points and use that to calculate the total length of the shark with the help of a software program. The same method previously was used to measure whale sharks.

Along with working with the Innovation team, McComb-Kobza in September visited a Longmont High School animal behavior class to talk about her research. After her research trip, she’s also planning a live webinar for students and teachers. The webinar, to be held at the shark lab at California State University Long Beach, is set for 10:30 a.m. MST on Oct. 24. Starting Oct. 15, she’s planning to spend five days observing great white sharks from submersible cages near the remote island of Isla Guadalupe, 150 miles west off Mexico’s Baja California Peninsula in the Pacific Ocean. The island is home to a population of more than 120 great white sharks.

McComb-Kobza said the sharks travel among several islands in the region, which also potentially includes a shark nursery off the California coast. Some come back year after year, and researchers want to track their growth. The measuring device provides an opportunity to get a more accurate measurement than estimating the length of the sharks, she said. The length also allows researchers to estimate a shark’s weight and maturity. “It’s a basic biologic measure, but something we don’t always have the opportunity to get,” she said. “It’s really useful information about a creature we think we know, but we really don’t.” She’s also hoping to see a massive female shark that appears to be the biggest great white ever filmed — a distinction that could be verified with the device built by the Skyline students.

The Skyline students said they’re anxious to learn how the device works in the field, allowing them to make adjustments to improve it. “It’s a real-life problem,” Guerrero said. Axel Reitzig, a program director at the Innovation Center, said he’s hoping the aquatics robotics team will start to get paying clients as they continue to develop their skills. Boulder County Open Space, Longmont and the Denver Water Board are among those who have expressed interest in underwater robotics, he said, with Boulder County looking at the technology as a way to monitor fish habitats added to the bottom of reservoirs. “There are good application opportunities,” he said. “There’s a lot of potential.”