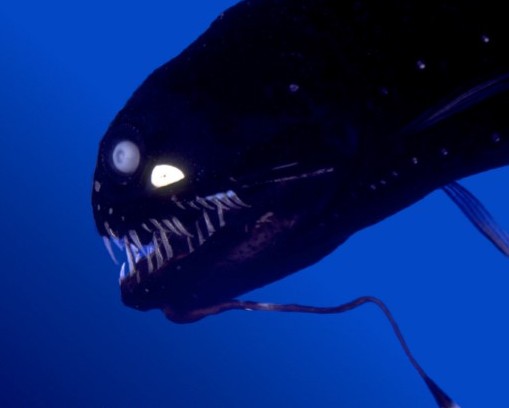 Our ocean is home to charismatic creatures like dolphins, whales, sea turtles, all manner of colorful fish and countless other species that fill us with wonder. For many, the ocean conjures up images of sun-dappled coral reefs, pods of playing dolphins or giant schools of fish.

But there are also many species that live beyond the illumination of the sun’s rays and so have developed fascinating adaptations for surviving in the harsh mid-to-deep ocean. Creatures that live at such depths must cope with conditions like low oxygen, extremely high pressures, low food availability, and complete darkness. And the deeper you go, the stranger things get.

With Halloween right around the corner, here are some of the spookiest creatures that call the ocean’s cold dark depths home.

While the vampire squid’s name and appearance may be rather frightening, these creatures are only about 6 inches long, with a maximum length of a foot. They live deep down in the ocean between 1,500 and 10,000 feet. Oxygen is scarce this far down, and vampire squid inhabit what is called the oxygen minimum zone, or OMZ. One result of this is that there is not enough oxygen for aerobic metabolism to occur in many organisms. The vampire squid, however, is able to survive in an oxygen saturation value as low as 3%, and breathe normally—something no other cephalopod (octopus, cuttlefish, Nautilus, etc.) can do. 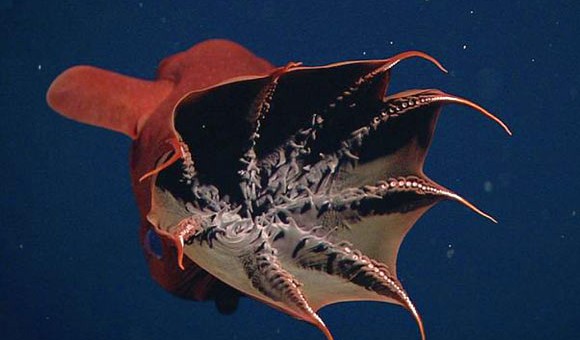 Instead of spewing ink when threatened, the vampire squid turns nearly inside out, exposing small spines called cirri. If feeling very threatened, these animals can produce a cloud of sticky, bioluminescent mucus with orbs of blue light. Coupled with wiggling its glowing arms and erratic movements, it is more difficult for a predator to choose where to attack, allowing the squid to vanish. 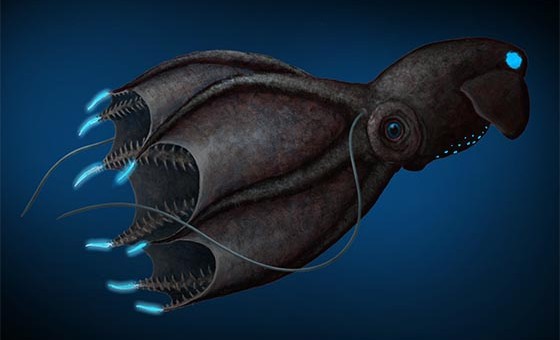 Goblin sharks tend to dwell on the ocean floor along continental shelves and have been found in the Atlantic, Indo-Pacific, Oceania, and the Pacific. While the majority of goblin sharks that have been caught were found between depths of 200 and 1,000 feet, they are known to swim up to depths of 4,000 feet. Adults usually grow to between 10 and 13 feet, though a 20-foot female discovered in 2000 showed that they can get quite a bit bigger than previously thought. 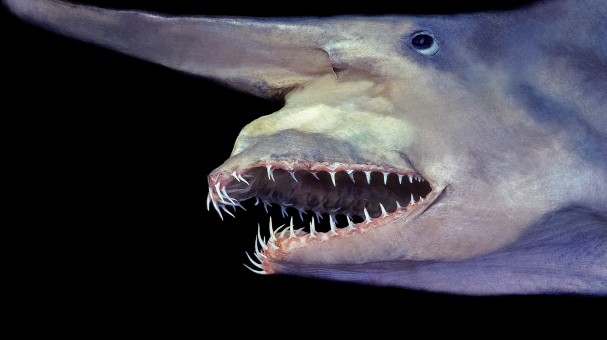 Goblin sharks are very distinctive due to their long, flat snouts. When fish, crustaceans or mollusks come within striking distance, its jaws can spring forward toward the prey. A sucking motion then helps to bring the prey into its mouth.

Goblin sharks have been spotted the most off the coast of Japan (about half of all sightings) and are named for their resemblance to the goblins of Japanese folklore.

There are over 200 species of anglerfish, and while they can be found throughout the ocean, most live in the waters of the Atlantic and Antarctic. Some live in shallow tropical waters while others live more than a mile down. 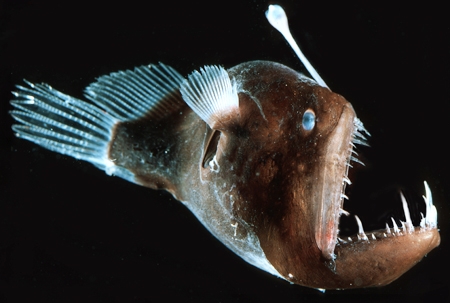 A deep sea anglerfish, one of the many deep sea species. Photo courtesy of David Shale.

Like many other deep sea dwellers seeking to conserve energy, anglerfish are not particularly active and prefer to let their prey come to them. They have large mouths with very large teeth relative to their body size. They attract prey by a bioluminescent bulb, composed of luminous bacteria, that sits on a retractable lure, called an esca, on their heads. Some species of anglerfish can slide the esca back into a groove, allowing the lure and prey to move closer to its mouth. Depending on how it rotates the lure, anglerfish can make the lighted tip emit a flash or a glow. Their large jaws, thin bones and flexible skin make them able to eat prey twice their own size.

It is only the females that have the lure, however, making the males and females of this species look very different. In fact, females can be up to ten times larger than males. 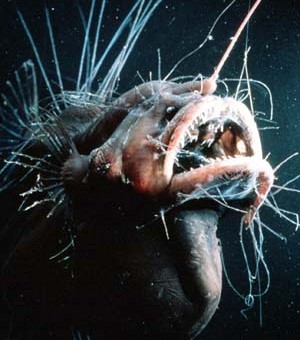 The long fin rays of fanfin anglerfish help them sense movement in the water. Photo courtesy of David Shale.

The black dragonfish also lives deep in the ocean, between 5,000-7,000 feet. Like the vampire squid and anglerfish, it too is bioluminescent. The blackdragon fish has light-emitting organs along its body called photophores that it uses to confuse predators. It also has lights by each of its eyes that flash while looking for prey or trying to attract a mate. 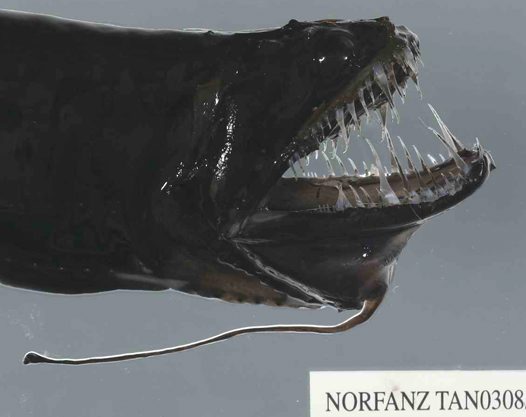 One unique trait of this fish is that it can produce light in the red/infrared range, and since infrared isn’t visible to most animals, the blackdragon fish has the distinct advantage of lighting its way with lights that most other animals can’t see. At the same time, it can produce light in the blue/green range of most other deep sea creatures. The blackdragonfish hunts by using the bioluminescent barbell on its chin to attract prey right into its waiting mouth. 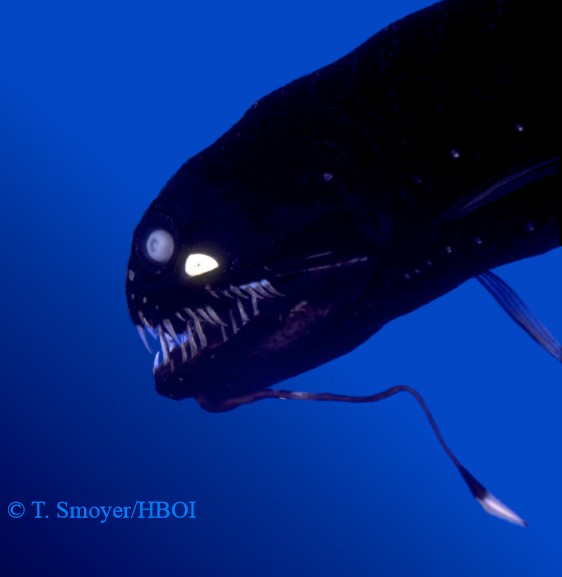 The black dragonfish is covered in photophores, and when disturbed it lights up all over, even down to its fins. Image courtesy of T. Smoyer/Harbor Branch Oceanographic Institute.

This has barely scratched the surface on the strange and mysterious creatures that dwell in the ocean. We know more about the surface of Mars than we do the deep sea, so just imagine how much there still is waiting to be discovered. The deep ocean is perhaps our last unexplored frontier here on Earth.

For teachers wanting to share the deep sea with their students, here are some activities, videos and photos that will help them learn about the strange creatures that live there and the adaptations they have evolved in order to survive in such harsh environments.

Activity 1
This lesson plan from National Geographic has activities for grades 3-5 and explores the reasons why so many sea creatures have bioluminescence and how they use it.

Activity 2
For another fun way to learn about bioluminescence, see activity 3, suitable for grades 3-6.

Videos
If you are looking for videos to show your students on ocean exploration and or bioluminescence, this is a great link to a series of videos on deep sea creatures.

Photos
NOVA has a collection of photographs and drawings of some of the ocean’s strangest creatures.