Women in Science and Engineering (WiSE) Symposium: The Ocean is Calling 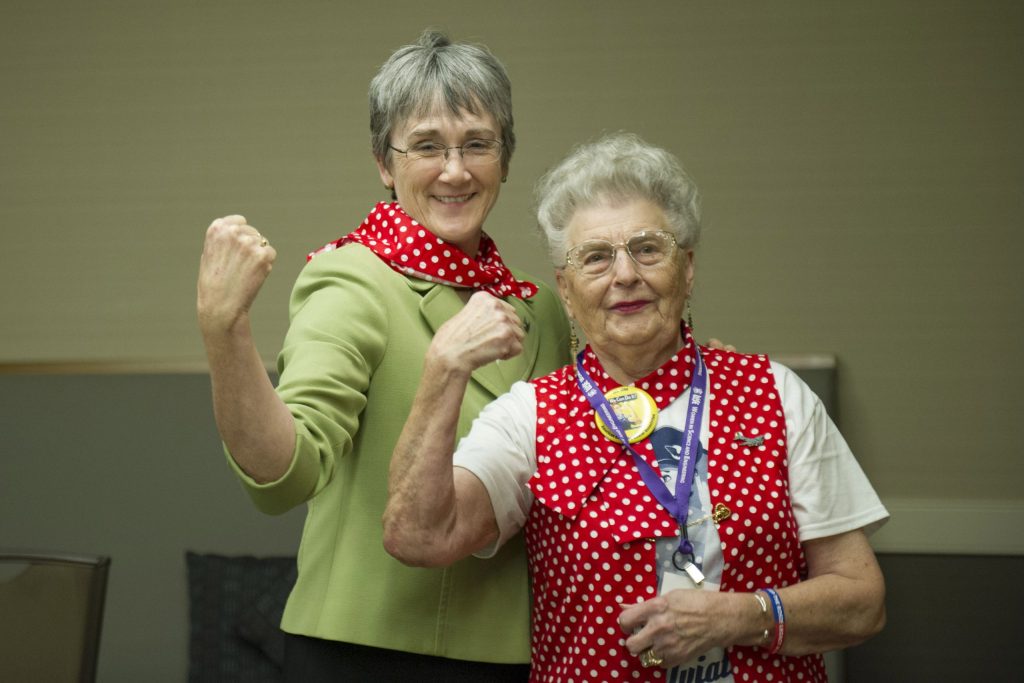 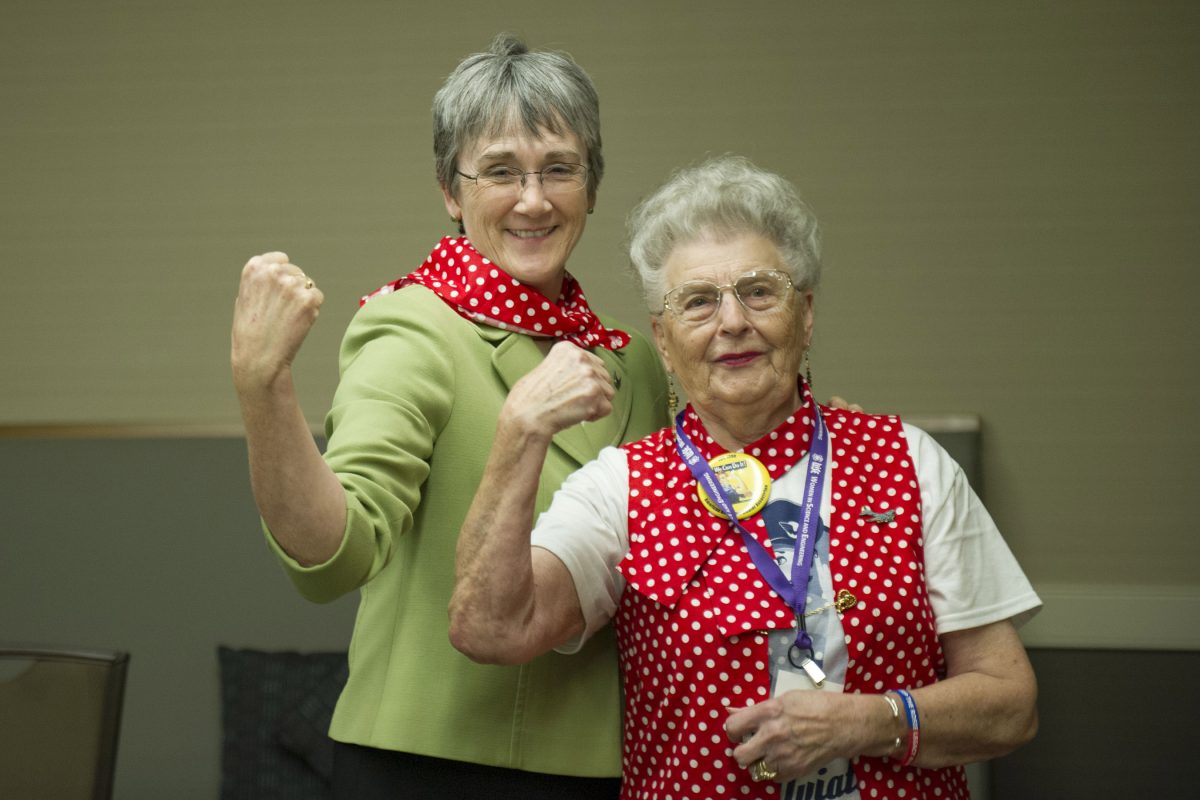 Rosied Up – The Honorable Secretary Heather Wilson and Ms. Mae Krier, one of the Original Rosie the Riveters. Photo credit: WiSE.

Did you know that the first female four-star general of the Air Force went to school for engineering? Not only that, but General Janet Wolfenbarger earned two Master of Science degrees. Talk about a role model! How about Rosie the Riveter – did you know that women went to work in manufacturing during World War II? Ms. Mae Krier stepped up to support the war effort and built aircraft. How cool is it that she can say that she built a B-17 Flying Fortress? Ladies: there are no limits to what you can achieve because of the many women like these two who have paved the way. 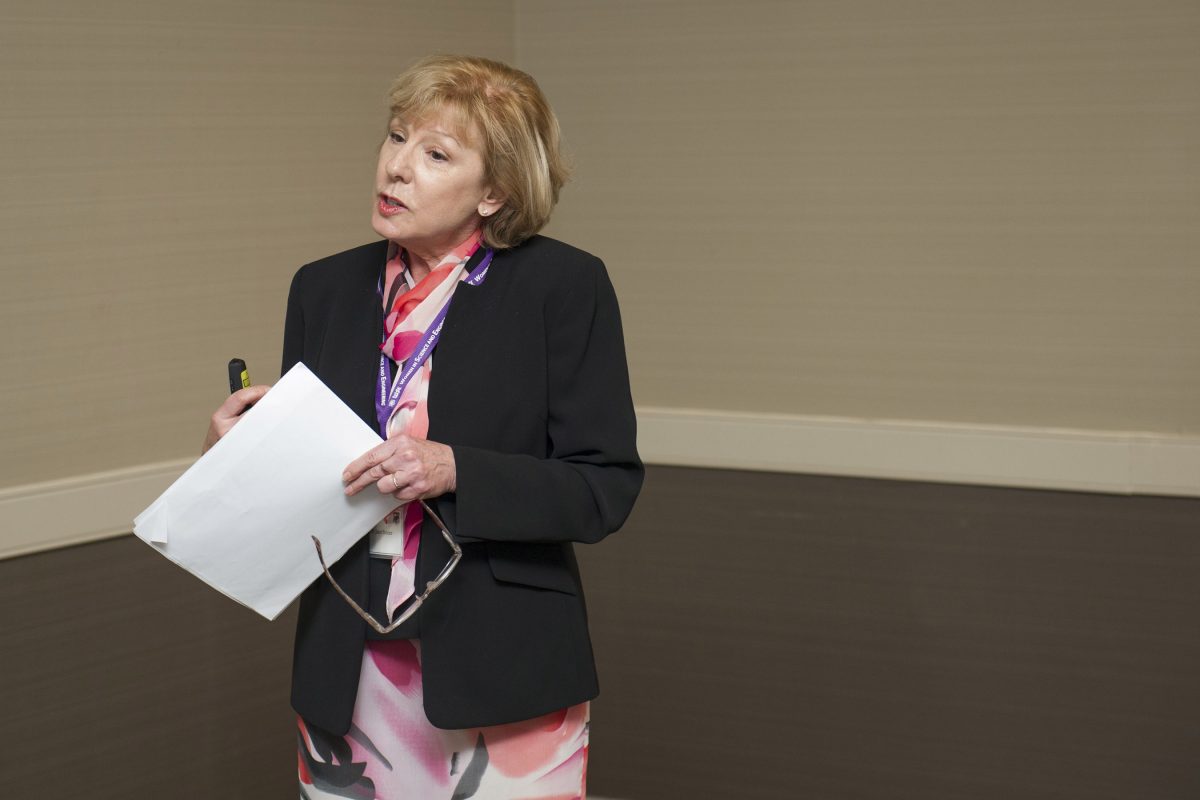 I was an invited guest speaker at the Air Force Technical Applications Center’s Women in Science and Engineering (WiSE) Symposium organized through Patrick Air Force Base in Melbourne, FL. My first thought was, “What…? I have nothing to offer as a guest speaker at a military function.” My profession revolves around cleaning up environmental contamination; their profession revolves around keeping America safe. The two did not equate in my mind. It turns out that I actually did have a lot to offer. The symposium brought in speakers of all nationalities, professions, and genders to work together to inspire the next generation of STEM leaders, which I was able to do by showing off some of the incredible initiatives that Ocean First Institute takes to further ocean conservation through education and empowering students to explore the STEM fields. The sold-out session drew a variety of attendants: Air Force personnel with no professional connection to the ocean, local citizens with an interest in conservation, parents and their school-age kids, and a marine science teacher with a group of high school students. As I realized afterward, there wasn’t a single person in the room who didn’t fall in love with at least one facet of the ocean after watching videos of measuring sharks with lasers and jazzed-out underwater robots. 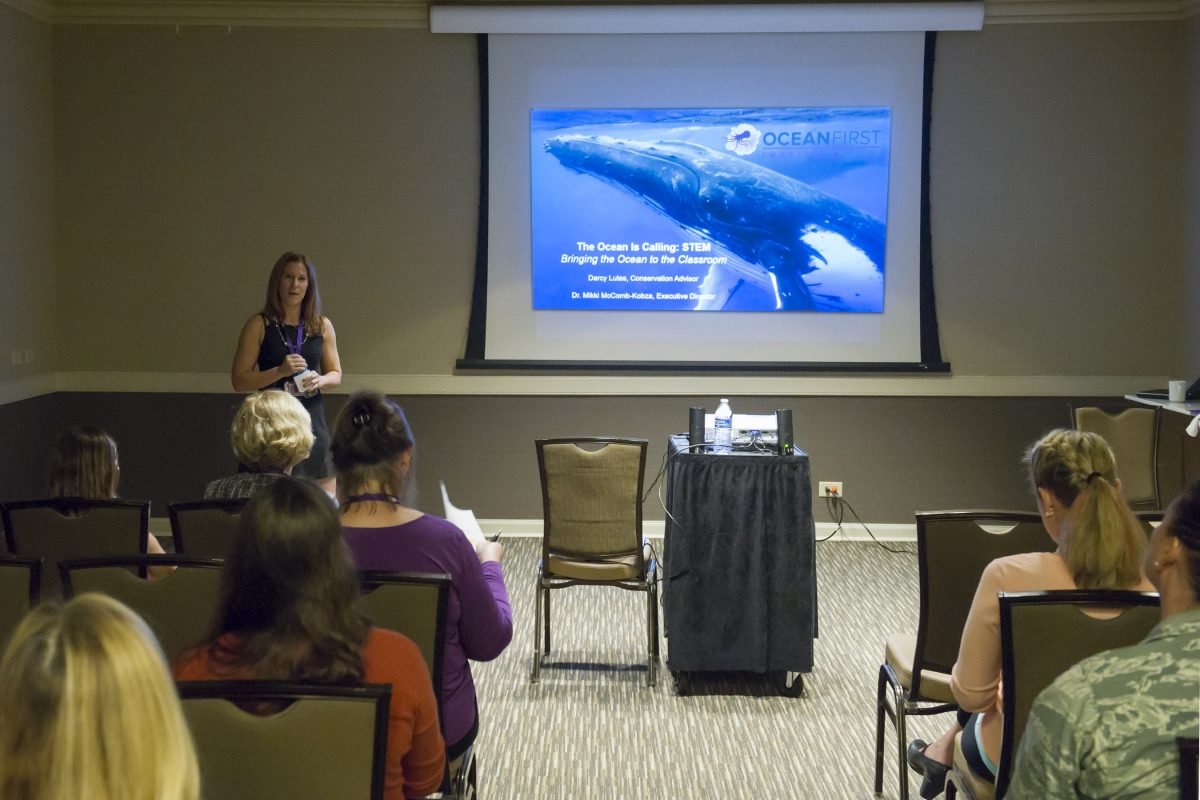 The most inspiring part of the session was the dialogue that was created with the audience. Several locals asked what they could do to help clean up their beach. It brought up a beautiful conversation about single-use plastics, personal responsibility in picking up litter, and reduce-reuse-recycle. That conversation led to a discussion about education, which prompted a father to ask about the type of education and experience his future marine biologist daughter may need after high school. The high school group then chimed in with questions related to their science fair projects, which then turned into a conversation about runoff pollution and coral reef degradation. We even talked about shark evolution and laid to rest a few peoples’ fears of hammerheads. Ultimately, two exciting things happened as a result of the presentation. I witnessed one of the attendees order a drink specifically without a straw; and I was told by a heavy hitting woman in the military that although she was settled in her career, the presentation made her want to go back to school and study marine science. 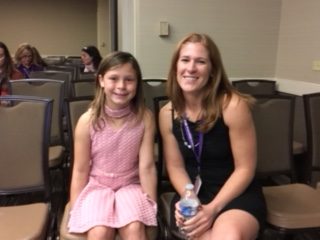 Raised by scuba diving parents who taught her to value and respect the ocean, Darcy donned her first scuba tank at age 9 and blew bubbles in the backyard swimming pool. She told everyone afterward that she was going to break out of Oklahoma and become a marine biologist.

Darcy earned a BS in Marine Biology from the University of North Carolina Wilmington and an MS in Environmental Science from the University of Oklahoma. Her research experience includes studying coral recruitment and larval development in Key Largo and Puerto Rico, tagging and rehabilitating sea turtles in the Carolinas, and rehabilitating marine mammals and birds in Alaska. She realized the incredible opportunity she had to influence others when she became a biology lecturer at the University of North Florida. She squeezed in marine science lessons every chance she got, and she became passionate about getting her students as excited as she was about the ocean.

Currently, Darcy is an environmental scientist at a Boulder-based firm with a focus on large-scale environmental monitoring and remediation. She is thrilled to work alongside the visionaries of Ocean First Institute and share her passion for the underwater world.